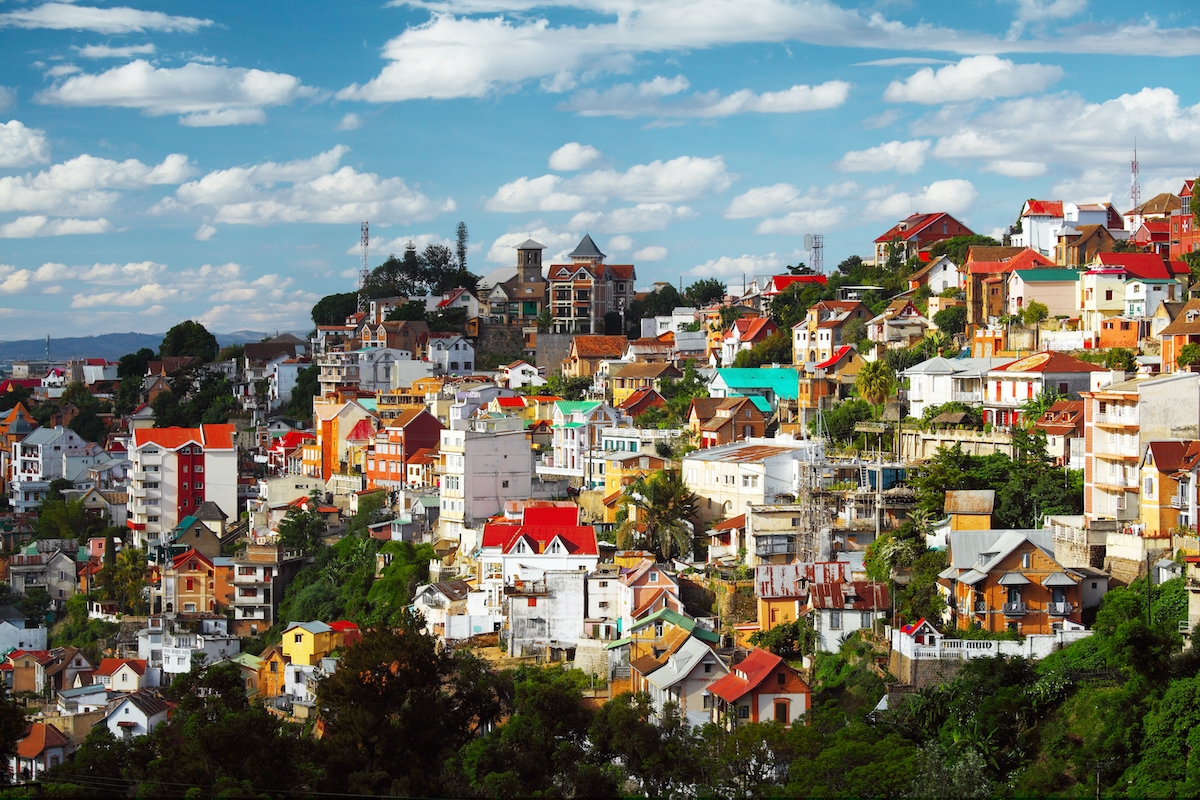 9 most colorful cities in Africa

For the last installment of our series on the most colorful cities on each continent, we have reached Africa. And, as if Africa as a whole weren’t already colorful enough, with its majestic landscapes, animals and plants, any congregation of people usually leads to new riots of color. Magnificent, lively and colorful markets; patterned and shiny materials transformed into traditional clothing; and this typical blue worn by the Berbers is just the beginning. Color is everywhere, and quite often, pops of color more distinct from the local architecture are added to the mix.

Here are some great examples stretching from the north of Africa to the southernmost point, and some in between, including a few islands, to give you a taste of all the most colorful places and cities on this exciting continent.

I chose my favorite places, some are cities, some are parts of towns and some are natural wonders. All of this will make your eyes pop and make you want to pack your bags immediately.

The Bo Kaap neighborhood is on my list of the most colorful cities in the world because not only is it the most colorful place on the continent, but it’s also my favorite place, period. There is so much to love in Cape Town, with color all around, but the old slave quarter of Bo Kaap is the best. The history of the neighborhood is gruesome, but with a literally brilliant ending: only freed slaves were allowed to paint their homes brightly, and the entire neighborhood eventually turned into a rainbow of colors. One of the most Instagrammed spots in town, each house tells a story and makes for a great shot. There is also the cuisine of this Malay region, as colorful and pleasant as the architecture. Be prepared to spend some time here and bring a camera.

Pro tip: There is so much history in this neighborhood that it is best to take a walking tour with a local who can tell you everything, and also take you to taste great food.

Chefchaouen is also one of the most colorful cities in the world, but not because of the myriad of colors, but because all the houses are painted a beautiful blue. This blue city, nicknamed the “Blue Pearl of Morocco”, is located on the edge of the Rif Mountains, in the north-west of Morocco, and is a particularly blue city (like Jodhpur in India). Visitors come to marvel at the once white buildings that have been treated to blue, and legends tell different reasons why the city is blue. It looks like it keeps mosquitoes away, makes the sun’s heat less fierce, or represents the sky and the sea. But really, it’s just pretty.

Pro tip: You have a pretty good view of the city from the top of the kasbah, but for the best view of the whole blue city, exit through the east gate of the medina, cross the river and follow the hike in the mountains to what you reach the little white mosque. From there, you will really appreciate the touch of blue that is Chefchaouen.

Chamarel is a village in the southwest of Mauritius and would, on its own, be quite banal if it were not the gateway to the national parks that surround it. It is also famous for its landscape which attracts visitors with its natural beauty, wilderness (perfect for adventure sports and hiking) and the area called Land of Seven Colors. Seven Colored Earth is a geopark with some 600 million years of natural history and is famous for, you guessed it, the different hues the earth presents here (and not all shades of brown). Here, the earth makes a spectacle of itself by showing itself in red, brown, purple, yellow, green, orange, purple, and shades in between, although the actual definition of each color may vary depending on who is viewing it.

Pro tip: The best time to really appreciate the different hues is near sunset, so with the park closing at 5:30 p.m., arrive as late as possible and linger until they tell you to leave.

As so often happens, some of the most picturesque places in the world often hide a terrible story. The island of Gorée, off Dakar in Senegal and in the far west of Africa, has a dark slavery and colonial history, told in the Maison des Esclaves. Due to Gorée’s strategic position as a trading post, the picturesque island with its beautifully colored buildings has been fought over by Europeans since the mid-1400s. The Portuguese, the Dutch, the English and eventually the French argued against each other. all control. Today, the island is a UNESCO World Heritage Site and is a thriving art center filled with artists and markets where you can buy their works. Its colorful art, houses and markets contrast sharply with its dark background.

Pro tip: Take a short boat trip from Dakar to the island and enjoy views of the coastline.

Just down the road is a superbly colorful spot: The Pink Lake, or “the pink lake”. Pink because of the bacteria that produces a red pigment to absorb sunlight, the lake also has a high salt content, up to 40 percent in places, making it comparable to the Dead Sea. During the dry season, it even exceeds the salinity of the Dead Sea. The salt is harvested by the workers along the coast of the lake, but there is also a beach club and a restaurant popular with people bathing in the salt lake, as the bacteria are completely harmless to humans. It’s the perfect touch of natural color, especially when contrasted with the white of the salt hills piled up alongside the lake.

Pro tipWhether you are based in Dakar or at one of the resorts along the coast, there are many day trips that combine the Pink Lake with an excursion to the charming Bandia Nature Reserve where you can marvel at the gigantic baobabs and a wide selection of African animals living in a protected environment.

Capital of the island of Madagascar in the Indian Ocean, Antananarivo is a fitting capital for an intriguing and diverse island. This capital not only deserves an entry in the selection of Africa’s most colorful places because of the eclectic and brightly colored houses that clutter the hillsides, but also because Tana (as the capital is conveniently abbreviated by locals ) managed to unite the different tribes and ethnicities of this large island and to reign despite and because of the diversity of the mix. The color in Tana comes from the houses, its art, the markets, the people, the history, its cosmopolitan cuisine and its various spices.

Pro tip: You cannot visit the capital without seeing at least part of the island, best explored by tours, if only because of its size.

The small town of Muizenberg on the Western Cape at False Bay, about 16 miles from Cape Town, stretches between mountains, a road skirting the bay, a small railway line and the beach. Muizenberg means “Mouse Mountain” in Dutch. It sounds busy, but it isn’t, and it is indeed quite scenic. What makes Muizenberg more famous than its small restaurants and bustling seaside community are the bath cabins, which are rather colorful. Many communities around the world have them, but they are not as popular as they were in Victorian times, and each remaining example is always worth a stop. These provide a nice splash of color against the blue water of False Bay.

Pro tip: Due to the sheltered environment of the bay, the water here is warmer than further south and is ideal for water sports. Why not learn to surf?

Looking at photos of Sidi Bou Said in Tunisia, you might think you are looking at Santorini in Greece if you didn’t know better. The white buildings against the blue of the Mediterranean, glistening in the sun and with blue doors everywhere, make it a photogenic and instantly relaxing place. The doors are the same blue as these Berber dresses and are made of wood, but enhanced with a wrought iron decoration. Add green branches of bougainvillea with pink blossoms crawling over the houses and you have a colorful spot that personifies the beauty of the Mediterranean. This is probably why so many artists and writers have visited this place for inspiration: From Flaubert, Chateaubriand and Simone de Beauvoir, to Matisse and Klee, they all loved this city.

Pro tip: Stay at the small boutique hotel Bou Fares for a total immersion in the white and blue experience of Sidi Bou Saïd.

Green cap, or “Cape Verde”, is an independent archipelago of about 10 islands in the Atlantic Ocean, about 350 miles off the West African coast. Boa Vista, meaning “beautiful view”, is the easternmost island, and its capital Sal Rei, which is home to half of the island’s population (12,000 inhabitants), is a quiet little town. Although surrounded by white sandy beaches and the blue ocean, there is also a beautiful colorful range of painted houses, especially in Rua de Bom Sossego. The cobbled street is shaded by trees and lined with low-rise buildings in pastel colors that once again bring to mind a colonial past.

Pro tip: The jury has decided which is the best island in Cape Verde, each with something special to offer, so why not indulge in an island hopping tour?

The 18% of tree species in India are threatened with extinction; 41 extinct in the…