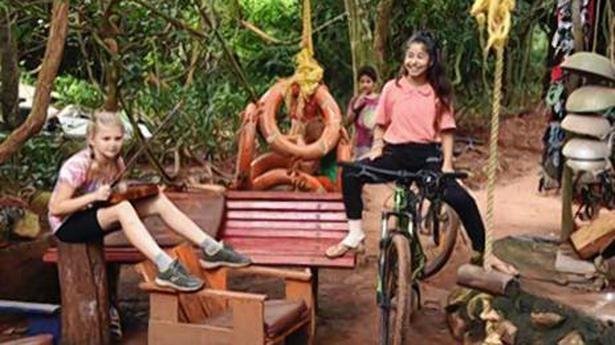 Coda, produced in Auroville, will be screened at the South Asian Short Film Festival

A short film produced in Auroville as part of a Masterclass series, directed by top film professionals, has been selected for screening at the Fourth South Asian Short Film Festival 2021, which is scheduled to begin in Calcutta in mid -November.

Coda, directed by Sudipto Acharyya, was set up during a one-month masterclass session organized by the Auroville Film Institute in December-January 2020-21. The teaching-mentoring sessions were facilitated by a faculty of industry professionals.

The film (English / fiction category) was selected in the competition section of the festival to be held in Nandan, Kolkata, from November 15 to 22.

The 10-minute film revolves around its musician-protagonist Andrei, a Londoner, who is drawn to Auroville’s work-life philosophy.

Andrei, who has been teaching music to young children in Auroville for many years, enjoys his work and his stay in the Experimental Township.

However, the day comes when Andrei’s wife and son come from London and want him to return with them because he got a respectable position in a conservatory there. Andrei is forced to make a decision against his will. He goes out one last time to teach his students and gets lost in the woods. His students find him and they improvise a music lesson in the woods.

The film ends with Andrei collapsing as the music reaches a crescendo.

“Considering that we are now finishing a masterclass in Ladakh, the news of a film we made during a similar session in Auroville last year is a sweet surprise,” said Richa Hushing, filmmaker and co-director of the Auroville Film Institute. Chronology of Auroville.

She was, along with Rrivu Laha, the executive producers of Coda. The other collaborators were Shanti Bhushan Roy (director of photography), Amitabh Chakraborty (editor), Madhu Apsara (sound design) and Dawn Vincent (sound recording).