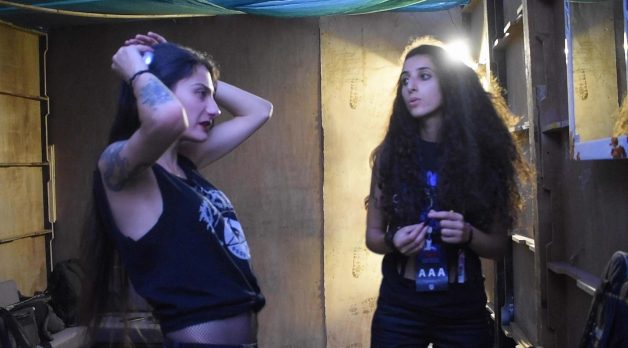 The subject of Sirens, Rita Baghdadi’s third feature-length documentary, is the all-female Lebanese thrash band Slave to Sirens, captured here against the unrest that has rocked Lebanon in recent years as well as in performances including one at the Glastonbury Festival. Baghdadi recalls how difficult it was to capture enough footage at the festival and how she turned a film about a band into a film about their twenties.

Director: How and why did you become the director of photography for your film? What factors and attributes led you to be hired for this position?

Baghdadi: My style of telling the truth is closely tied to being behind the camera, and I like to keep my crew small so I can act instinctively and not disrupt for a moment. This is all very intimate, but it can also be demanding. I haven’t met many other filmmakers willing to hold the camera as long as me.

Director: What were your artistic goals on this film, and how did you achieve them? How did you want your cinematography to enhance the film’s storytelling and the treatment of its characters?

Baghdadi: With Sirens I knew I wanted to pitch it as a coming-of-age movie. I wanted it to be as immersive and intimate as possible so that the public felt close to these young women. I wanted the narrative to highlight the ecstasy and agony of being in your twenties and feeling invincible, but with seemingly impossible dreams. I knew I would have moments where I wanted to see all five band members in a wide frame, but since the film focuses on Lilas and her inner struggle, my camera always landed on a close-up of her face.

Director: Were there any specific influences on your cinematography, whether it was from other films, or visual art, photography or something else?

Baghdadi: I would say the music of Slave to Sirens was the main inspiration. But also, there is a small tribute to Céline Sciamma Youth in the movie. And Wong Kar-wai love mood is always in the back of my mind.

Director: What were the biggest challenges in producing these goals?

Baghdadi: Between economic collapse, revolution, power shortages, pandemic, explosion and more pandemic, we had a remarkable number of disasters to go through during production.

The pandemic has posed more challenges than just health and safety, as it has completely crippled the music industry. I was trying to make a film about a burgeoning band and when we started filming I had no idea we would have so few opportunities to capture Slave to Sirens live. Thank goodness my producer Camilla fought so hard to get us permission to film at Glastonbury because it ended up being one of our only plans.

Director: What camera did you shoot with? Why did you choose the camera you made? What glasses did you use?

Baghdadi: I used the Canon C300 MKII because it shoots 4K, it’s light enough to shoot handheld all day, and it performs well in low-light conditions. I also know this camera like the back of my hand, so I knew I could take the picture in any circumstance. The main lens I used was the Sigma 18-35mm f/1.8. I chose it because I needed a good wide angle in low light, and frankly it was within my budget at the time. I have always believed that the best tool is the one in your hand.

Director: Describe your approach to lighting.

Baghdadi: I like to use natural light as much as possible. I’m one of those people who walks around turning off all the lights as soon as I enter a room. On Sirens, however, I wasn’t always able to use natural light as the group was most active at night and electricity throughout the country was unreliable. So I ended up taking two battery-powered 12-inch Quasars with me that have magnets so I can stick them anywhere. And I brought some colored gels to spice it up a bit. I also realized while coloring that we used a lot of cell phones as light sources throughout the film.

Director: What was the most difficult scene to achieve and why? And how did you do?

Baghdadi: Glastonbury. This festival is gigantic, I think around 900 acres, so just the amount of ground my sound engineer Tatiana and I had to cover to transport our gear was exhausting. And it was Tatiana’s first time camping, ever! I filmed the performance live with one camera, so it was literally me sprinting from behind the stage, into the crowd, across the lawn and back again, trying to cover every angle to every song. The festival did not allow us to bring more than two people, so it was like that.

Director: Finally, describe the finish of the film. How much of your look was “prepared” versus done in the DI?

Baghdadi: I shot LOG, so the color was done entirely in post by the fabulous Maria Carretero. But I knew from day one of production that I wanted the film to have a saturated, dreamy yet grainy quality, so I shot with a black pro-mist filter on the lens.