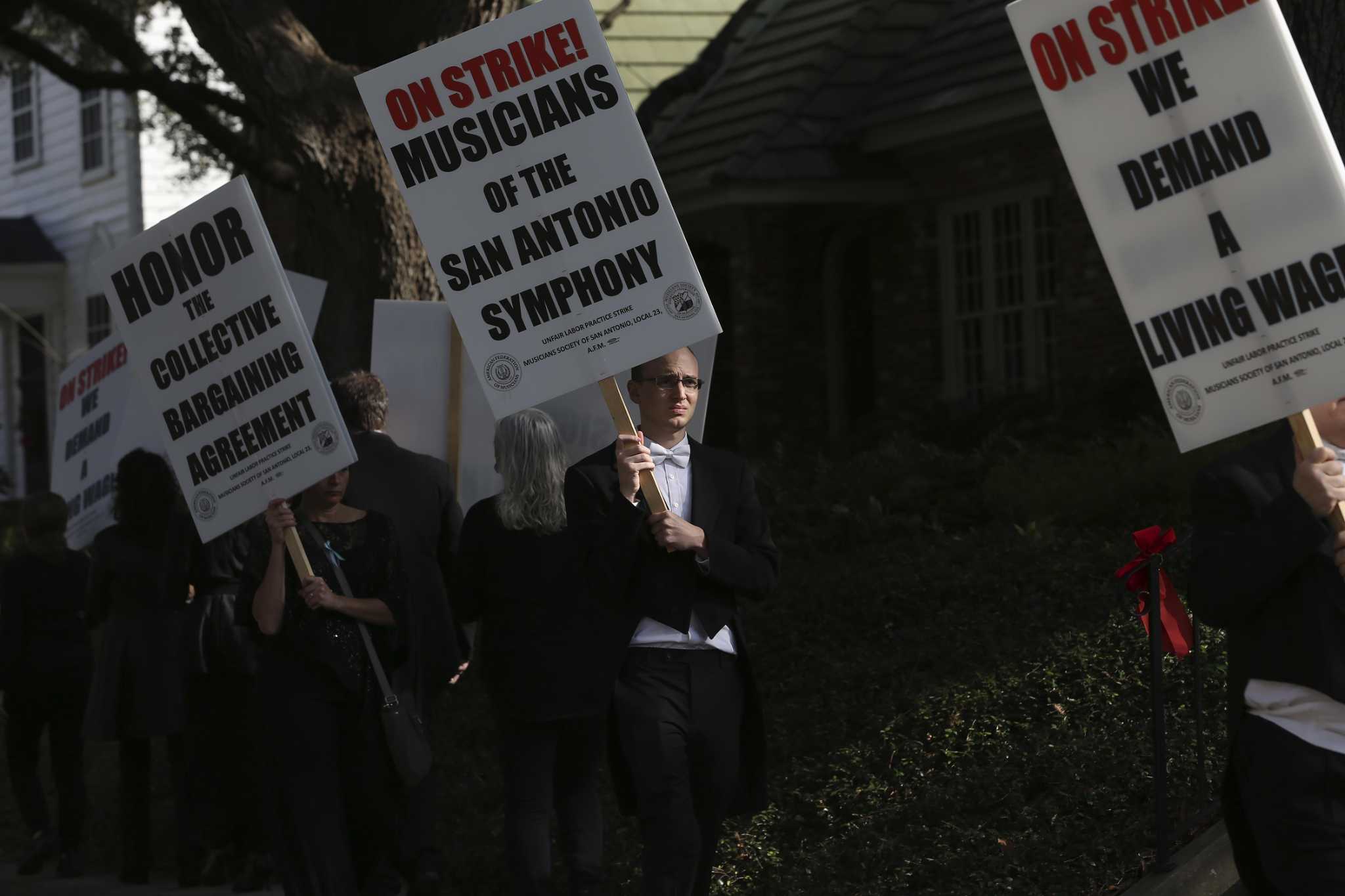 In view of a better contract of employment, musicians in concert dress complete the picket at the home of the president of the board of directors of the symphony orchestra in San Antonio

Eighteen musicians dressed in concert attire marched in silence Thursday afternoon outside the home of the president of the board of directors of the San Antonio Symphony Orchestra, continuing their efforts to encourage symphony leaders to negotiate fair employment contracts.

The silent picket comes after the 72 musicians went on strike in late September amid a labor dispute with the Symphony Society of San Antonio, the nonprofit board that runs the orchestra. The musicians and the board had renegotiated the contract for the 2021-22 season. The musicians unanimously rejected a proposal that would cut wages and eliminate 30 full-time positions. Musicians who lost their full-time jobs would be offered part-time contracts without health insurance.

The picketing lasted about an hour near the house on East Hollywood Avenue. A few passers-by expressed their support by shouting or honking their horns.

After the board of directors imposed the contract in September, the musicians went on strike. The board has since canceled health insurance and other musicians’ benefits, and both parties have filed a complaint with the National Labor Relations Board. Six concerts have been postponed or canceled.

Many more musicians wanted to attend Thursday’s event, according to Mary Ellen Goree, chair of the San Antonio Symphony Musicians’ Bargaining Committee and Principal Second Violin, but many worked out of town to make ends meet during the strike. .

“We were silenced by our board and management, who essentially forced the strike by imposing conditions that were intolerable and that they knew we would find intolerable,” Goree said in an interview before the picket line. . “So we’ll be there, dressed in our concert clothes, and silent as we are silenced on stage.”

The basic symphony salary – the minimum amount a musician earns – was already low. The contract negotiated in 2019 was for $ 35,775 per year, well below the national average for symphonic musicians, which is $ 47,706, according to employment site ZipRecruiter.

“If we were to accede to the demands of the board, we would be signing the death warrant for the San Antonio Symphony,” Goree said.

Although musicians have been picketing at other locations, such as outside the symphony orchestra’s offices on Navarro Street, Goree said it was the first silent event and the first outside someone’s house.

“I think it’s safe to say that” Symphony Council President Kathleen Weir Vale “was not present or anywhere around when we picked up Navarro Street,” Goree said. “So if she’s working from home, we’ll take her where she is.”

Bassoonist Brian Petkovich has been part of the symphony for 26 years. He is a representative musician on the symphonic council.

“Cuts are not a solution,” he said. “They are a symptom. We really need to fix the economic engine of the symphony before we can talk about going forward and partnering with a leadership that doesn’t seem to know where it’s going.

“We have been suffering for decades without endowment,” he continued. “The community supported the performing arts by building the Tobin Center and renovating the Majestic Theater before that, and we need to see an investment in people. “

Vale did not respond to a phone call for comment. Her husband opened the door to the Express News minutes after the picket ended, saying he had just come home and his wife was running an errand.

“To date, the musicians’ union has not responded to our December 10 request to continue negotiations, nor has it returned to the negotiating table with a counter-offer,” the commentary reads. “They also denied the Symphony’s request for mediation and binding arbitration. We hope to hear from the Musicians’ Union soon so that we can continue productive efforts to return to negotiations and a strike resolution. “

Daniel Wang, violist, has been part of the symphony for almost six years. He said he marched alongside his colleagues on Thursday to fight for his profession.

Wang said he considered staying in San Antonio for life, but sought employment elsewhere due to the conflict.

“It pains me to say this,” said Wang, “but it’s hard for me to see a long-term future here until our leadership shares the same desire to have an artistically excellent organization here.”