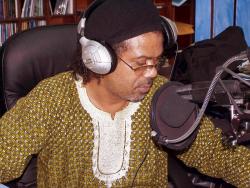 Musician and radio station owner Patrick Lafayette will be one of more than 100 blind artists performing today at a global benefit concert called ‘We Are With You’, to support and raise funds for blind Ukrainian refugees.

“The more than 100 blind performers have donated their immense talent because they know that music has power. If you enjoy good music in a range of styles, and even a little poetry, this is your chance to listen to some of the best the blind community has to offer, while donating money to support blind Ukrainians” , said the organizers, Mushroom FM on their website.

According to Mushroom FM, every penny raised will go to organizations helping blind Ukrainians, through their partnership with the World Blind Union Unity Fund, which is the global organization representing the estimated 253 million blind people. or visually impaired. They work actively with organizations in the region that provide support to Ukraine.

Mushroom FM highlighted the fact that one of the consequences of the Russian-Ukrainian war is that it has caused life-changing disabilities, including blindness. Another consequence, he said, is that war makes those who are already blind even more vulnerable.

“I would like to offer my sincere blessings to the Ukrainian people in general, and to the blind and visually impaired people of Ukraine in particular,” Lafayette said. “There’s one song in particular that I’m going to do. I wrote and produced it with seven other blind people. It’s called Rising and I hope everyone will be blessed and inspired by this song.

Rising appears on Lafayette’s 2019 album which called on the talents of blind people from the United States, Great Britain, Jamaica, Trinidad and Tobago and Sweden.

The estimated nine-hour event kicks off at 1 p.m. in Jamaica. So far, there are 42 contributions from unique artists, located internationally but set to play just one song each, with around 100 performances expected.

In addition to performing for the concert, Lafayette said his online radio station will also air clips from the event on Saturday. More than 15 online radio stations have pledged to air the concert which has already grossed $20,000 even before it aired. The official event hashtag is #BlindWithU and donations to the cause can be made via: http://nfb.org/BlindWithU.