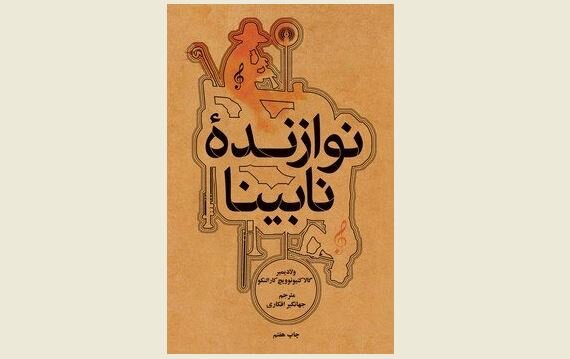 TEHRAN – The seventh edition of the Persian translation of the 1886 novel by Ukrainian writer Vladimir Korolenko “The Blind Musician” has been published.

Published by Elmi Farhangi Publishing House, the book was translated into Persian by Jahangir Afkari. The first edition of the Persian translation was published in 1967.

The book is a psychological study, in which the inner life of the blind is analyzed, in view of their trials resulting from their lack of sight.

The subjects of the study are a blind girl whom the author knew as a child; a boy, a pupil who was gradually losing his sight; and a professional musician, blind from birth, of superior intelligence, erudition and refinement.

Anagnos, director of the Massachusetts School for the Blind, who, after having praised its literary and artistic merits, declares it faithful to the conditions for the intellectual and physical development of this class of unfortunate people.

Arguably his most acclaimed and well-known work, “The Blind Musician” aroused controversy in its time and was the subject of severe criticism from the private professor at Moscow University, AM Shcherbina, who had lost sight at the age of two and considered Korolenko’s theories about the blind. people’s “intrinsic desire for light” is totally unfounded.

“Creating an honorable treatise on the psychology of the blind has never been my goal,” Korolenko explained in a letter to Arkady Gornfeld on January 10, 1917.

“Rather, the idea was to take a closer look at man’s desire for all things unattainable, for that ever-lacking fullness of life,” he writes.

Originally serialized on February 2 and April 13, 1886 by Russkiye Vedomosti, the novel subsequently appeared in a significantly edited version in the July 1886 issue of Russkaya Mysl and a year later was released as a separate edition, again revised by the ‘author.

Korolenko did not stop editing the text until after the release of the sixth edition of the book in 1898.

Photo: Cover of the Persian translation of Vladimir Korolenko’s novel “The Blind Musician”.

These mysterious animal burrows seem to pre-date animals. We finally know how