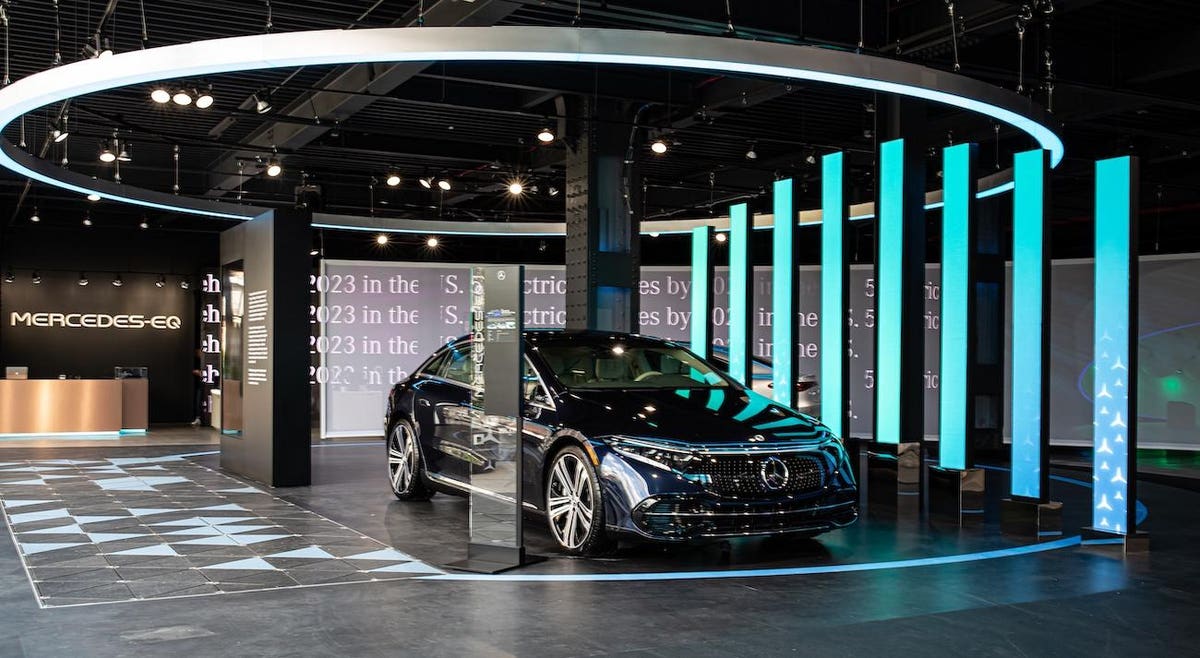 As Mercedes-Benz prepares for the release of its new electric vehicles, the company is opening several short-term showroom “experiments” to educate people on a new type of car.

To present the new Mercedes-EQS 2022 sedan, the German car brand is building pop-up locations in New York and California that look less like a dealership and more like a high-tech tribute to the future of driving. The first center, called the Mercedes-EQ Experience, will debut Monday in Manhattan’s Meatpacking District and will be open to the public until December 1. A second pop-up will be in Santa Monica, California later this year and a third will arrive in 2022, possibly also in California or elsewhere on the West Coast.

Mercedes-Benz is also launching a road show in 20 US cities for people to test electric vehicles for the first time. Starting with events in Las Vegas and Orange County this week, the company is taking its cars on tour to give drivers 30 minutes behind the wheel and a chance to experience various digital features inside the car.

“When you have a brand as old as Mercedes-Benz, as incredible as the non-electric products are, it’s not so much of an education factor,” says Monique Harrison, Brand Manager Mercedes-Benz USA. . “It’s very different in the way we address the consumer [with EVs] and providing them with a full educational experience.

This year, many automotive brands have looked for creative and innovative ways to market a growing fleet of electric vehicles ranging from affordable to luxurious. Some bought expensive, humorous Super Bowl ads. Others have turned to augmented reality and data-driven hyper-targeted advertising to find and connect with potential customers.

Mercedes-Benz isn’t the first auto brand to open an EV-focused showroom in Manhattan, or even the first in the Meatpacking District. A three-minute walk away is the Tesla Showroom which opened in 2017, years before the current electric vehicle boom began. One block from Tesla is Lucid Motors, which opened its own showroom in June a few weeks before the California-based electric vehicle startup went public on the Nasdaq.

The Mercedes-EQ Experience, located in a corner under the famous High Line Park and around the corner from the bustling Chelsea Market food and retail building, occupies 8,000 square feet and allows visitors to walk around and to learn more about the company’s vision for electric vehicles. . In addition to two versions of the EQ parked inside, there’s an interactive walkway where footsteps are converted into kinetic energy thanks to a partnership with UK startup Pavegen. Near a sidewalk window, two electric vehicle charging stations and an interactive digital screen showcase the company’s network where people can charge electric vehicles across the country. The showroom is also intended to tell the story of the evolution of Mercedes-Benz from the first cars to the present day: a long table is filled with illustrations and historical facts and a large video screen nearby showcases the various brand car models.

While the Experience Center largely focuses on electric vehicle education, some elements focus on other aspects of the premium automotive experience. For example, one section is inspired by an in-car collaboration with famed acoustic ecologist Gordon Hempton, but the use of ambient sounds and lights does not fully represent the work of Hempton, an Emmy-winning and known sound-maker. for his work of capturing the sounds of the world and all their nuances.

According to Harrison, the goal of Mercedes-Benz’s experience and broader marketing strategy is also to promote the level of luxury possible with electric vehicles. While auto dealers still play an important role, the company is adopting more of a ‘push strategy’ with electric vehicles, which could be key to differentiating itself in an increasingly competitive market and in a whole new era of development. ‘innovation.

“If I’m being honest, we’re the ones looking for those customers who may not be thinking about going electric,” she said. “I mentioned the education side of it, and there are so many who will become electricity customers who may not be considering today. For us that’s a huge conversion point within our existing base, and on the other hand, we’re looking at those who were sitting on the sidelines waiting for an electric product from Mercedes and now this one is here.

Mercedes-Benz also recently marketed its electric vehicles elsewhere in New York. At last month’s US Open tennis tournament, the company official revealed the EQS. In addition to building a virtual reality tennis game on an LED wall that displayed electric motion during a game, the company also donated $ 1 to the National Energy Education Development Project for every time visitors walked on its catwalk. Pavegen, who was harvesting energy to power an upcoming Alicia. Key events.

Harrison said the brand and its product portfolio are getting “younger and younger,” offering a new challenge to “make sure it’s done the right way” to attract EV customers for EQ and others.

“Those waiting on the sidelines are largely younger consumers,” she said. “And one that we’re really excited to address with the EQ models because it gives us a chance to communicate a new, fresh, forward-thinking product that is committed to a sustainable future.”