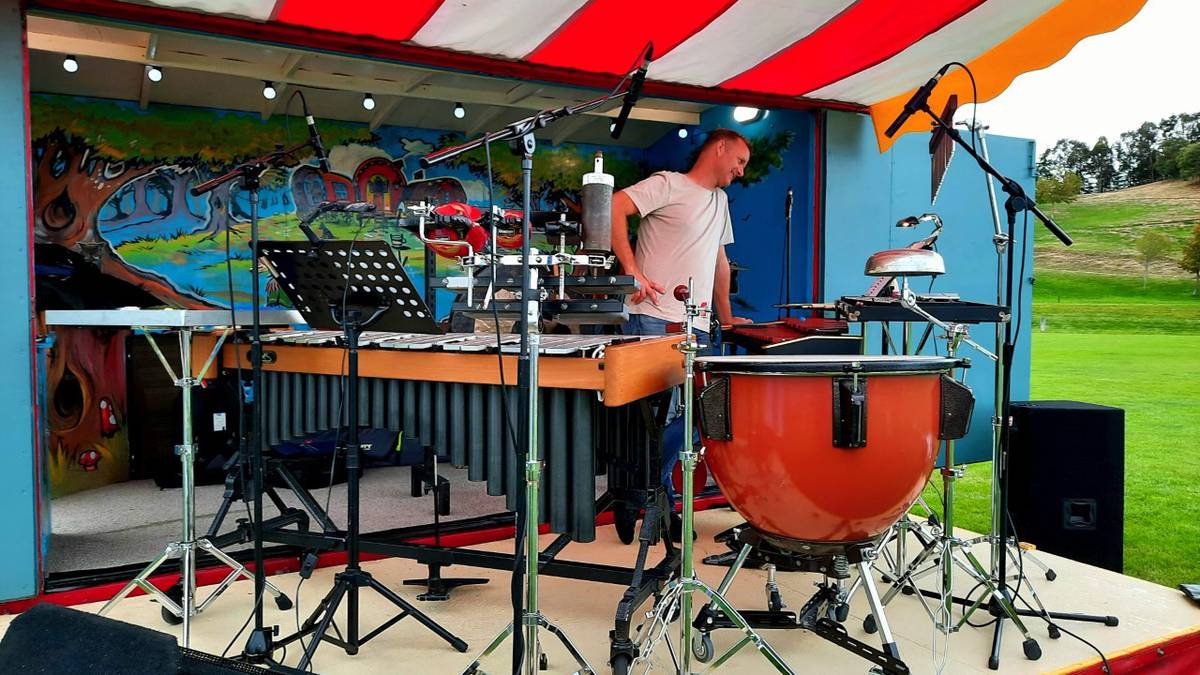 Jeremy Fitzsimons with the set up for the movies. Photo / Supplied

“It’s a real buzz to play for the public.

“They react to the live screen and we feed off that laughter.

“We also feed off the audience’s reaction to our music. “

Fitzsimons will perform at the Silent Movie Festival at the Old Dairy Factory in Norsewood from January 13-16.

There will be two films at the festival, both with Charlie Chaplin: A life of dogs and The child.

Fitzsimons says he will put on some percussion that coincides with punches and various sound effects.

The music and accompanying sound effects won’t be exactly as they were played in the 1920s, but they will still be live.

“Traditionally they had these silent movie pianos and organs and they had a whole bunch of levers and stuff.”

The musician played the piano, using the levers to trigger the drums and sound effects, “which is quite a skill.”

Festival organizer David Selfe, who wrote the music, decided to use two players for the same kind of effect, but very true to the style of the time.

Performing live on a silent movie isn’t as easy as it sounds, says Fitzsimons.

“You have to have one eye on the screen, one eye on your music, and one eye on David because he’s waving to me as well.

“I need three eyes and about five hands. But we’ll get there.”

Fitzsimons says there is also a lot of improvisation in concerts like this.

“There is no conductor so we really follow what’s going on on screen.”

One thing he loves about it is the way the audience reacts to it.

“We’re going to start playing and people are going to watch what we’re doing. Then, five minutes later, they forgot we’re here.

“They’re just focused on the movie.

“This is really our reason for being. We add to the film.

“It’s not really about us, but it also adds a living element.”

He says people often come to him after to see what he did during the movie and to see the instruments up close.

Performing in front of an audience is nothing new for the Wellington musician, who started learning the drums when he was young.

He came from a family of musicians and his brother, who played bass, needed a drummer.

When he started studying at Victoria University, he turned to the more classic side of things.

Graduating from the university in 1995, he continued his studies for his master’s degree at Northwestern University in Chicago.

Upon his return to New Zealand, he performed with a local orchestra, as well as with the New Zealand Symphony Orchestra.

Since then he has also done “a lot of diverse and interesting concerts in parallel”, including the Pink Floyd Experience.

He has been working as a freelance percussionist for 25 years.

He met David in Auckland when they did Wretched together.

“He just called me out of the blue and suggested I do this.”

Fitzsimons says the two films chosen for the festival are good.

“They totally stand the test of time. They’re still as funny as they used to be.”

He says there were things that didn’t date well, but they were generally good.

“I’ve always liked silent films, and I hope that in the future we will do a few more. Not just Chaplin, but some really good Buster Keaton films.”

Tickets for the Silent Movie Festival are $ 10 and are on sale now via eventfinda https://www.eventfinda.co.nz/2022/silent-movies-live-2022/norsewood.