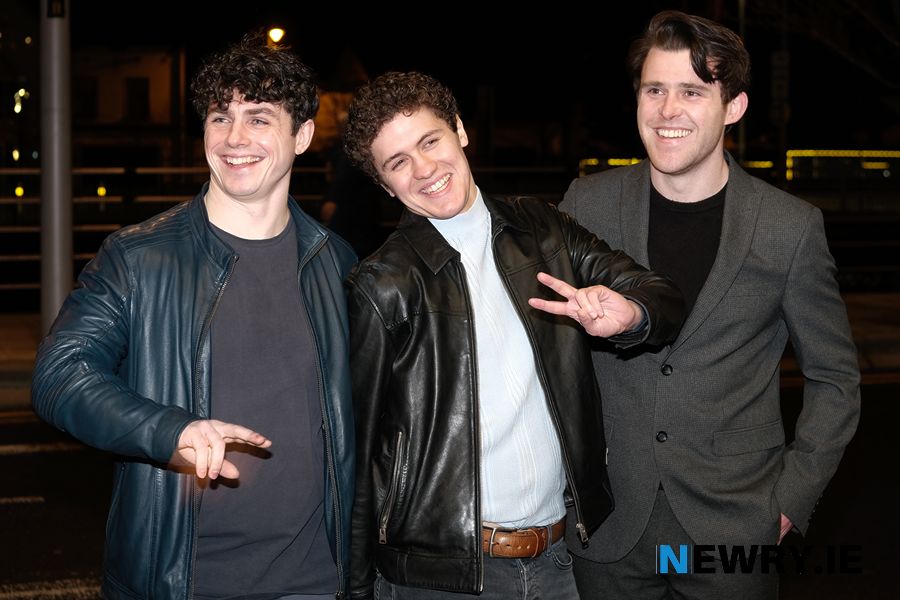 Last night in Newry saw an incredible wave of support, appreciation and a not insignificant amount of fear for the young filmmakers who brought the world premiere of their short film, Reavey Brothers to the Canal Court Hotel in the City, putting a spotlight on forever on their murders and others during the troubles.

UVF Gunmen shot and killed the three brothers John-Martin (24), Brian (22) and Anthony (17) Reavey when they broke into their home in Greyhilla, Whitecross on January 4, 1976. John-Martin and Brian died this morning. that night as Anthony who was gunned down while hiding under a bed survived, but died later that month. It was a horrible time locally. That same night three members of the O’Dowd family were shot dead near Gilford and the next day ten workers were murdered in Kingsmills, a few miles from Whitecross.

Reavey Brothers focuses on the story of the three brothers and their mother Sadie in the time leading up to their murders.

The sold-out audience was made up of those who lived through the Troubles and remembered the days of the Reavey Brothers shooting vividly, those who were not even born when it happened and the most poignant of all. siblings and extended families of the murdered boys.

The production of the film was very community driven with an online fundraising campaign exceeding all expectations and the production filming in Whitecross and surrounding areas.

John Reavey, a nephew of the brothers directed the film and was delighted with the audience response to the film screenings, which saw seven screenings in Newry, Belfast and London sell out within minutes of the tickets being released. “I’m so relieved by the response, it was a lot of pressure and I knew my job was done but to see it in front of me, to see the family happy, I’m in heaven,” he said.

“Seeing the community come together to support not only the film but also the message behind it is honestly so inspiring. I am delighted to see the number of young people here too. It was an area I wanted to target, so for them. to come with their families, I know stories like this are going to be told forever. ” Reavey added.

It was not all dark with many lighter moments throughout the night. At one point, MC of the night, Damian McCullough asked why the team hadn’t used the Whitecross football pitch, but rather the Beleeks to whom the manager joked “We needed it to look like 1976”

Dessie Trainor of Portadown and Paul Reavey, a brother of the victims, who also spoke on the night, explained how the murders of family members not only affected their immediate family for a year or two, but continues to affect them. affect in their daily life until today.

John Reavey speaking about his grandmother Sadie Reavey, the mother of the boys, said: “She represents voices that women did not have back then so I got her very involved. Sadie Reavey is one of the best humans who ever graced this earth. “

Geraldine McAlinden who played Sadie said: “When I saw the script I didn’t know anything about the story other than it was a local story it was so well written by the guys. Before I even knew anything about Sadie, I really wanted to play her “

Dylan Llewellyn who plays Anthony Reavey is from Surrey and is best known for his role as “Little Englishman” in Derry Girls. Llewellyn said: “I feel like an honorary Irishman, Ireland is such a big part of my life now.”

Kevin Nugent who played Brian Reavey is from Portadown and currently a senior Maghery footballer explained how he must have missed Maghery playing Crossmaglen in the County Armagh final because they were filming the same day, but he didn’t have no regrets.

Jonesborough native Niall McNamee who plays John-Martin Reavey said: “I was blown away that I got to play a small part in it all. I did not know the extent of it at all. I keep telling you this. [John Reavey] I’m so proud of you, I’m so impressed. It’s incredible.”

Director John Reavey spoke about the production and the importance of bringing the story to life. Reavey said: “Just 20 minutes is so hard to tell this whole story. Obviously I was very happy to do it, but there are a million other stories and a million other people affected, in particular. in this room they may know someone, or their family has been hurt and i really hope they find some comfort in watching a movie like this knowing that their stories will never be forgotten i really want may this movie be a bit of a steady point that anyone who has been touched by the issues or knows someone who can watch this and feel in their heart that someone still remembers them, they will never be forgotten and that’s what I want to make sure that happens. “

Summing up the event perfectly, Noelle McAlinden, Geraldine’s sister who played Sadie Reavey, said to the audience: “I just want to say John, the wisdom you have, the dignity in which you represent your family is amazing and I have to say young people don’t get a lot of good press and i have to say that as a team you are absolutely amazing ambassadors.

“Tonight is a real testament to how stories of truth and justice can be told in such a dignified manner. We heard from John on the news just before the night began and if there is ever had an ambassador and an example of how this country can move forward is this experience tonight.

McAllinden concluded: “If there is anything that can unite us in terms of trust, truth and justice, it is creativity, culture and self-expression. It helps us heal, it helps us grow and most of all, it helps us connect.

In February, the film is slated to be released on an online streaming service. “Which is good because then we can really market this tour to the rest of the world and I want someone who has the power or the opportunity to help us keep telling stories like this the resume. It’s the dream, ”concludes Reavey.

Find out more about the film at REAVEYBROTHERSFILM.COM