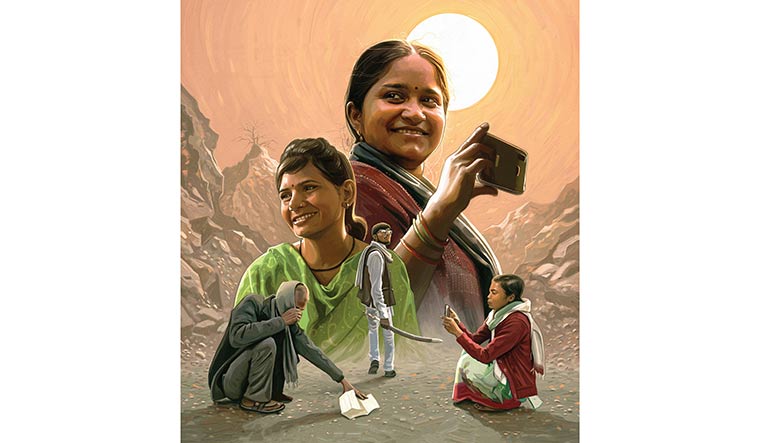 Nobody Took Us Seriously Say ‘Writing With Fire’ Creators

An Adalit reporter stands next to a television in an austere green office in Chitrakoot, Uttar Pradesh. In front of her are seated about twenty women, with impatient, nervous faces, their eyes turned towards a future where their place is uncertain. The female journalist, Meera Devi, is the bureau chief of Khabar Lahariya, India’s only newspaper run by Dalit women. This women’s rendezvous could be historic for the 20-year-old newspaper, as it marks the transition from print to digital.

“If we don’t adapt, we won’t survive,” says Meera.

The women look respectfully at their new cell phones. “I’ve never used a cell phone,” said one. “I’m afraid of damaging it”

Editing is at the heart of Writing With Fire, India’s first Oscar-nominated feature documentary. Initially, its creators, Rintu Thomas and Sushmit Ghosh, were in conflict over the purpose of the film. They tried many permutations and combinations before realizing that the arc of the movie was going to be the newspaper’s journey from print to digital. “That’s also why the film is very consciously chronological,” says Rintu. “Because after every 10 minutes something drastically changes. We wanted to give the illusion of passing time by watching these women work. Yet it’s also very intersectional – it’s a film about gender, media, populism and patriarchy. We went deep inside. We entered into their intimate stories.

The film was physically challenging – shot over four years in extremely dusty mining belts where temperatures are a constant 40 degrees, public transport is not readily available and you often have to travel with 12 people crammed into an auto-rickshaw. Because they had to walk an average of two to three hours a day with the journalists, the filmmakers shot the film freehand, without a tripod; there would only be an amount of extra weight they could carry in their backpacks. “As we struggled with the physical aspects, the themes of the film constantly swirled in our heads: the mechanics of the Fourth Estate, its true values, its independence, seeing things through a feminist lens, what citizenship and democracy can really mean,” says Sushmit. “Every time a scene played out, we were like, how does this fit into the larger narrative of the film?”

For the filmmakers, the journey began in 2016, when they took a train to UP after seeing a photo essay of a lone reporter from Khabar Lahariya walking through a barren landscape with a newspaper in her hand. They kept the crew small, there was just Rintu (co-director and sound engineer), Sushmit (co-director and cinematographer) and Karan Thapliyal (cinematographer). The music was done by Tajdar Junaid and Ishaan Chhabra.

Writing With Fire primarily follows three female journalists – Meera Devi, Shyamkali Devi and Suneeta Prajapati – each of them with a unique background that has defined their personality. The challenge was to win women’s trust. “They chose us to tell their story,” says Rintu. “During the first shot of shooting, we just followed them, we were very quiet. We developed a language where if a situation was risky – inside police stations or illegal mines – they would give us a clue to whether we could shoot or not. Soon they realized that we weren’t there to disrupt their work. The effort paid off. The film won more than 30 awards, including two at the Sundance Film Festival, in addition to score 100% on Rotten Tomatoes.

Interestingly, the filmmakers got married a year before Writing With Fire started filming, “so the movie lasted the whole life of our marriage,” Rintu says with a laugh. The two met at Jamia Millia Islamia film school in 2006 and worked together on their master’s thesis film, a short documentary called Flying Inside My Body, about how a gay, HIV-positive photographer used her naked body to create a photograph that challenged notions of shame and acceptability. A year after graduating, they started their own film production company, Black Ticket Films. “We both come from very service-oriented, middle-class families, so this was a huge departure from anything I imagined myself doing,” says Rintu. “We gave ourselves a year and said to ourselves that if Black Ticket Films didn’t do well during that time, we would dissolve it. We pooled our savings, registered the company and for the first six to eight months , there was no work. People thought we were too young. They said, ‘Your ideas are great, but where are your bosses?’ And that’s when this hunger to create our own freelance work started.

Some of their well-known documentary shorts include Dilli, an 18-minute visual essay on Delhi during the Commonwealth Games, and Timbaktu, which won a national award, about change in a small farming community in southern India. from its age-old practice of chemical farming to organic farming. “We’ve done a wide range of films,” says Sushmit. “People ask us, are you interested in social justice stories, and we say, no, we’re interested in deconstructing the world around us; this is the essence of our storytelling. So, although the themes have been the climate crisis, public health, women’s rights, they are first and foremost intimate and human stories.

The triumph of Writing With Fire is that it not only penetrates deeply into the lives of Khabar Lahariya women, but also into the recesses of their minds. The film is a gripping portrait of their fears, hopes and dreams. Their success, it seems to imply, is not in spite of their caste or gender. It is because of what these factors have made of them. Now they’re finding a way to create an alternative power structure that isn’t based on being aggressive or antagonizing people they disagree with, but rather being tough, thorough professionals. . “While mainstream reporters would report a road accident as breaking news, a Khabar Lahariya reporter would ask the tough questions,” Rintu says. “What was the budget for the construction of this road? How many were used during the fiscal year? Why does the road continue to be damaged? Nobody asks these questions.

As the documentary moves, literally and figuratively, so do the women. Meera was at the Sundance virtual premiere. She presented the film with Rintu and Sushmit for the Amsterdam International Documentary Film Festival. Khabar Lahariya collaborated with a German film festival for a three-day journalism event. “Journalists in Berlin collaborated with those in the heart of Bundelkhand,” says Sushmit. “These are system-changing conversations that are taking place.” After a lifetime of invisibility, these women are finally stepping into the light.