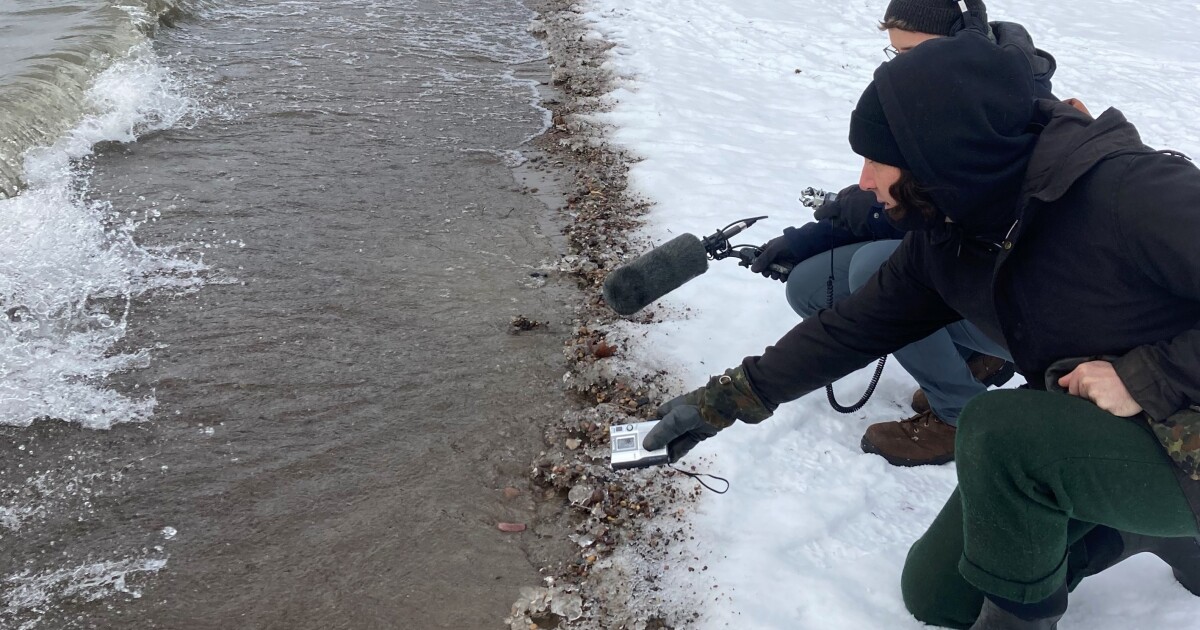 For several years, Burlington musician Wren Kitz has incorporated sounds recorded in nature into his music. But recently, Kitz has presented his field recordings, isolated from any music, to the public.

Its rich recordings include the sound of loon calls in chorus with bullfrogs, the sound of a hummingbird buzzing its wings as cubs race down a hill in the background, and the sound of ice hitting the shores of Lake Champlain.

As hosts of VPR’s Daily News Podcast Frequency, we’ve been interested in Wren Kitz’s wildlife recordings, because each week on the podcast we share nature sounds recorded by listeners, in a segment called “Wildlife Wednesday”.

So, to hear about Kitz’s approach to the art of field recording, we caught up with him in one of his favorite sonic environments: the shores of Lake Champlain.

This interview was produced for VPR’s daily news podcast, Frequency. Subscribe below.

Anna: For the uninitiated, can you explain what a field recorder is? What do you do?

Wren: For me, it’s like using an analog tape recorder and a microphone, getting out into nature and recording the sounds around me. A field recording really can be anywhere. It doesn’t have to be in nature. Nature is what I’ve been turning to for the past few years, recording natural sounds, but field recordings really refer to what it sounds like to be “in the field” recording.

Wren: From the beginning, when I moved to Vermont almost 12 years ago now, I had a little tape recorder that I recorded musical ideas with, and it often ended up in my pocket. And just going through my day, thinking of the recorder as almost like a camera in my pocket, you know, when you’re holding a camera and you’re walking around and you start seeing pictures? It was the same for me with recording.

Anna: What does it feel like when you listen? What does it look like in your mind, in your body, when you’re recording in the field?

Wren: I’m not a hunter at all, but I’ve recently thought about it the same as hunting. I have a hunter friend, and he was describing to me the practice of going out very early in the morning and sitting in one place for many hours. And even if nothing comes, the experience of sitting there has been a peaceful moment. Recording can be like that for me.

I’ll go to a swamp or the water’s edge of a pond and sometimes sit for hours waiting for something I’ve heard in the past. It’s once the sounds start happening that you have to press a bunch of buttons and worry that something’s wrong, or the wind gusts and pops a big pop on your recording or whatever else, this is the part that can be a bit technically stressful. But still fun.

Henry: What are you listening to? Why are you keeping your ears open when we leave this propane… [laughs]

Well, it’s kind of funny, funny passing noise, but I mean, it all starts from there. Not so much the Suburban Propane truck passing by right now, but just because of the music that surrounds us all the time. And if you stop and close your eyes and really focus on what’s going on, even behind the background noise of the Suburban Propane truck, there’s probably a plethora of things we can hear.

Right now, on the shore of Lake Champlain, you’re probably hearing winds rumbling through the trees. If you listen – oh, there was a leaf that just rustled. The waves that I know are behind us, so if I concentrate, I might be able to hear them. As you can imagine, when you put yourself in an environment where there are lots of different sounds, it’s an exciting experience and you start to hear more and focus very, very specifically on what you’re hearing.

Henry: So we do this little segment called Wildlife Wednesday, which was the origin of this, and we have people who submit their wildlife recordings, often, you know, something on an iPhone or something like that. I wonder if you have any tips for people when they go out and what they might listen to, how they might approach finding sounds in nature.

Wren: Of course. I can just say what I like to do, which is to remember that I have a recording device with me. And that sometimes helps me to open my ears more to what surrounds me. Sitting in one place is not the worst thing to do. Things tend to happen. And to be patient.

It’s like bird watching, you know, or like when you’re sitting in one place and you see the most. Sometimes if you’re sitting in one place, you hear the most. To concentrate. And remember, you don’t always get something, and you know, even if you have a good sounding recording every four times you walk around with a recorder, that’s a huge hit. There is always – there is always fun in nature.

Anna & Henry: Should we go to the lake?

Do you have questions, comments or advice? Send us a message or tweet us @TheFrequencyVPR.

‘All the Light We Can’t See’ Netflix Limited Series: Everything We Know So Far