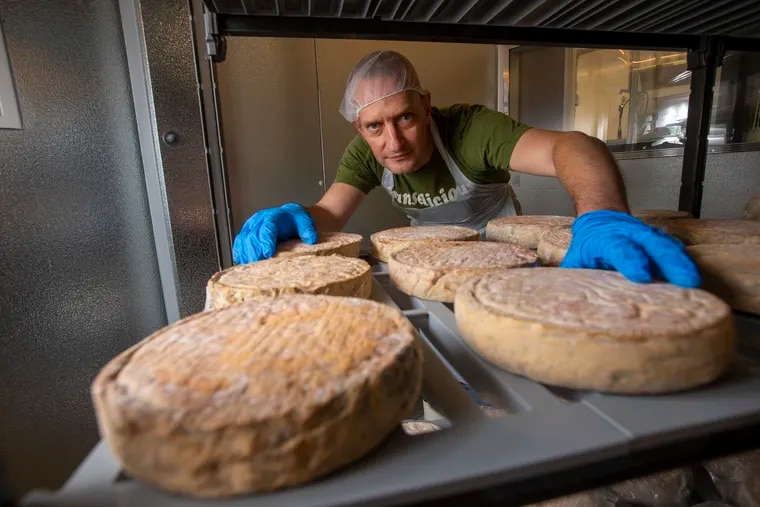 Yoav Perry tries to tame the ocean in the aging room of his new cheese making workshop in Kensington. But the salty brew of local seaweed infusing the brine of filtered seawater for Atlantis, his latest experimental creation at Perrystead Dairy, was surprisingly pungent on the early wheels.

â€œI really thought I figured out what this cheese was going to do for me and my aging room,â€ he said, shaking his head at some troublesome early prototypes. “I wanted it to be light and seaside, no fish and full of iodine.”

Perry finally found the fix, adding yeast to the surface of the cheese. before one of the seaweed infused brines, a move that allowed the three-pound rounds to develop a more melt-in-the-mouth consistency, and the kombu effect of puffing through the rich curds with a deep sea umami rather than the previously twang brackish. The finished cheese now has an earthy but balanced flavor with its orange and white rind speckled with seaweed reminiscent of mountain tomme, but with the subtle flavor of surf. Is this the first Jersey Shore tomme in the world?

“Maybe, but I’m not going to call it that!” said Perry. He objected not only to the overly broad nature of the tomme category, but also to the baggage of defining his cheese in European terms. â€œI am interested in making new styles of seasonal American cheeses. I don’t want to make Italian or French cheese. I don’t want to make a Camembert and just name it after a local stream.

Yes, Israel-born Perry jokingly admits a slight aversion to French terms since being kicked out of the Alliance FranÃ§aise as a child because he couldn’t master the proper accent. But his obsession with creating originals stems from the freedom he sees in American mash-up culture to mix and reinvent cheeses without worrying about the conventions of European traditions, which often dictate precisely how products are. manufactured.

“I take a (vegetarian) thistle rennet which is typically used for sheep’s and goat’s milk cheeses in Spain and Portugal, but then I use it with cow’s milk,” says Perry. â€œI coagulate it with a slow fermentation in mussels like a Loire goat, then I age it with cultures like an Italian robiola. You could never mix these things into one in these very protective European regions. To put it concisely, Intergalactic is a regional American pooch.

Given that Perrystead only opened its doors this spring, after Perry inserted two prefabricated rooms with cheese-making equipment and an aging cellar into this former musical instrument warehouse, the level of difficulty of his first products is intimidating because there is no roadmap for original recipes. Just trial and error and good instincts.

But Perry, 48, a former digital designer who previously ran an online supplier of cheese equipment to 700 producers around the world, puts his vast knowledge of processes, fermentation and cultures to use like a mad scientist on the go. dairy arts. While most cheese makers won’t use more than a dozen different cultures to affect the development of their cheeses, Perry said, he practically chuckled in glee as he led the way for a small glass freezer where he holds 125 different cultures.

â€œI love to mix them up and look at them like colors on a painter’s palette,â€ he said. â€œThey each have subtle differences and you can combine them in different ways to create interesting cheeses. They are truly magical. You design a cheese and imagine what it will taste like in two or three months, then you send them (to the aging room) to do your bidding.

Things didn’t always go as planned, especially at first when a problem with the capacitor forced him to throw in 150 pounds of cheese. More recently, a handling error ruined another 165 wheels.

â€œA new cave never works as well as an older cave that has become accustomed to the microflora that collects on the walls and shelves,â€ he said.

Finding reliable employees has also been a challenge. Finding the public’s interest in his cheese failed.

â€œIt started with very complicated cheese and I was afraid people wouldn’t understand it, but everyone really got down to it,â€ says Ann Karlen of Third Wheel Cheese Company., which locally distributes Perrystead cheese. â€œFor my customers, there is a lot of enthusiasm in buying hyper local cheeses. And people are really excited about the experiment.

At the same time, says Karlen, Perry is also keenly aware that her cheeses must also taste good in an accessible way, a trait she attributes to her business acumen and background in marketing and design.

â€œHe didn’t start (on a farm) milking cows, saying, ‘Now what am I doing with this milk?’ She said. “He decided to open a creamery in town to make cheese for a sophisticated crowd.”

Perry especially enjoyed his location in the heart of the Kensington-Fishtown Manufacturers’ Corridor, where artisan foods ranging from coffee to beer, spirits, bagels and pickles are made in neighboring blocks, and the landscaped patio in front of his dairy. hosts a Foodmaker’s Pop-up Market twice a month.

It is currently the only certified artisan cheese within the city limits of Philadelphia. And the famous author of Tenaya cheese â€Madame Fromageâ€Darlington says Perrystead’s unusual status as an urban creamery has wider implications.

â€œIt creates a cool access point for city cheese lovers to taste a piece of the countryside, and it raises awareness about the dairy industry in Pennsylvania – an industry where many small farms have been forced to close due to low price of milk, â€she said. . â€œIf we are to maintain a small batch, grass-fed artisan cheese scene in the United States, we need more people like Yoav Perry to develop the dairy community and make it more visible. “

The fact that Perry moved here with his wife and daughter from New York City specifically to start this creamery is also a validation of Philadelphia’s continued appeal as an affordable and accessible destination for creative food entrepreneurs.

â€œWe were so done with New York where the numbers just didn’t make sense,â€ Perry said. â€œBut it’s a fantastic city that actually has a cheese scene and top-notch restaurants. We are right off I-95 on the Northeast Corridor and surrounded by incredible farmland and world class dairy farmers. The numbers here make perfect sense.

Perry even got help buying production equipment with a state grant of $ 126,039 to support Pennsylvania’s dairy industry, and the dairy, in turn, receives its weekly milk deliveries from the Bucks and Montgomery counties.

Perry’s current challenge has been to pace the growth of what is still a very small start-up that currently only brings in 75 gallons of milk per week. He found immediate success with his Real Philly Schmear, a fantastic whole milk riff on cream cheese whose blend of cultures promotes a crisp flavor and mellow that has satisfying richness over the waxy texture of the competition. industrial.

But as orders poured in from all over the country after a functionality in Food & Wine For the Schmear who is, as the label notes, “actually made in Philadelphia,” Perry quickly realized his conundrum. The limited production capacities of the creamery are better spent on a cheese like Intergalactic, which, after slight aging, is worth almost double.

Schmear, which requires little to no aging, can still be a valuable asset to the growing business, but it’s the kind of low-margin cheese that needs to be produced at a higher volume. Perry is in the process of finding a solution to increase production.

Meanwhile, Perry’s imagination continues to run, aging cheeses drizzled with dry cassis wine from an importing friend, washing rounds in a local beer brewed with WildBrew Philly Sour yeast (created by the University of Sciences), among several other collaborations. The Real Philly Schmear, in fact, started out as a collaboration with Kismet Bagels.

Perry also worked with a local factory to make strips of Pennsylvania black walnut to eventually replace the traditional spruce bark that is currently wrapped around the aging cycles of its next in season cheese. Bottled fermented yogurt and kefir projects are still ongoing.

Perry, whose facility is not open to the public beyond the occasional pop-up patio market, also dreamed of new ways to increase the availability of his products. This includes plans for a cheese vending machine will soon be installed up front to give cheese freaks 24/7 access to their favorite Perrystead curd, stored on refrigerated trays that will function essentially as a sandwich maker.

â€œBut it won’t take cash – Apple will just pay,â€ Perry says. â€œBecause it’s Philly, after all. I don’t want people to blow it up and get covered in melted cheese.