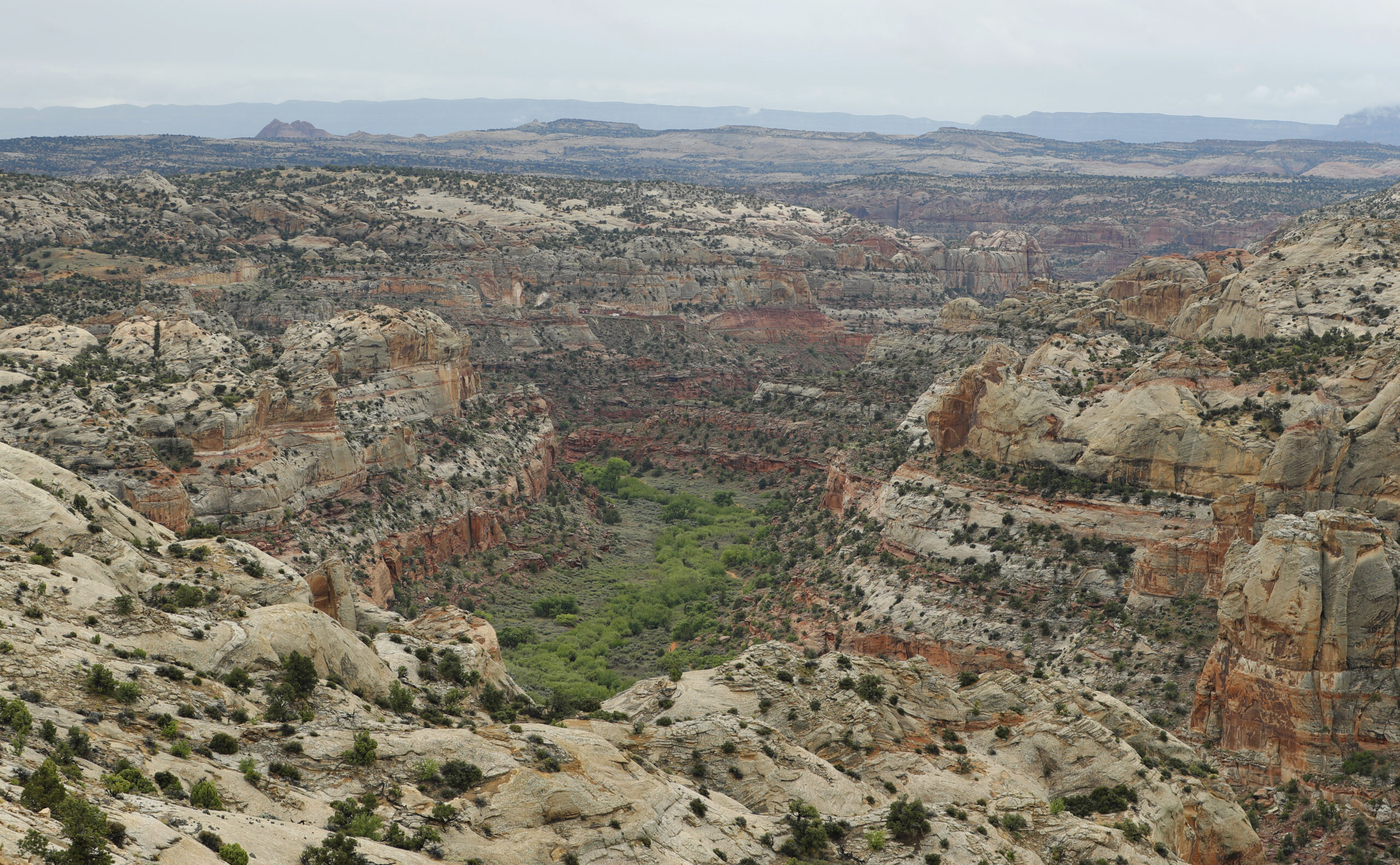 The multi-year debate over the conservation of the Bears Ears and Grand Staircase-Escalante National Monuments has focused on the tension between preserving the history and culture of the Indigenous peoples who have inhabited the region for centuries, and the efforts to exploit natural resources.

But on Friday, President Joe Biden gave the monuments new meaning when he restored their original boundaries in southern Utah and highlighted public lands as a tool in the fight against the climate.

White House climate adviser Gina McCarthy linked global warming to the president’s commitment to conservation as she opened the White House ceremony in which Biden signed proclamations restoring boundaries , which former President Donald Trump had cut back to pave the way for fossil fuel exploration.

Sitting at an ornate wooden desk on the North Lawn, Biden also signed a proclamation restoring the Northeast Canyons and Seamounts National Monument in the Atlantic Ocean, southeast of Cape Cod, which had was designated in 2016, but was then reopened to commercial fishing by Trump in 2020.

McCarthy, who led the US Environmental Protection Agency in the Obama administration, said these protections harness the power of soil, trees and water to build resilience against climate impacts facing the world. is already facing.

â€œTaking advantage of these natural climate solutions will protect public health,â€ she said. â€œThey will protect us against climate impacts. “

The signing came as Biden prepares to attend next month’s annual United Nations climate change conference in Scotland with virtually empty hands as most of his climate agenda remains in limbo, caught up in a battle of $ 3.5 trillion on a spending plan that would expand the social safety net and implement a first-ever U.S. greenhouse gas reduction policy in time to avoid the worst damage from global warming.

At Friday’s ceremony, the president quoted scientists who believe that protecting and restoring natural lands and water can “provide nearly 40% of the solution to climate change.” And he underscored his goal of halving U.S. emissions by 2030 and bringing the country back to net zero emissions by 2050.

“Achieving these ambitious goals will require nature itself to be a player,” he said, before signing the proclamations that restore more than 2 million acres to Utah monuments.

Utah’s Republican political leaders denounced the move. During Trump’s presidency, they lobbied the administration to downsize the Grand Staircase-Escalante National Monument, created by President Bill Clinton in 1996, and Bears Ears, which President Barack Obama created in 2016 at the behest of the five tribes with the deepest ties to the region’s rich cultural and natural history.

Now they condemn Biden’s decision to reverse the Trump-era borders that reopened access to the abundant deposits of coal, uranium, oil and gas that lie beneath the severely cut landscape. blast of red rock.

Redge Johnson, executive director of Utah’s Public Lands Policy Coordinating Office, pointed out that by refusing to work with Congress on monuments, the Biden administration may also have restricted some important climate tools.

Uranium deposited in and around Bears Ears could help fuel US nuclear reactors. The lithium reserves could be used there for the batteries needed for the transition to renewable energies. Forest treatments which are now prohibited by monument rules could have prevented forest fires and their emissions.

In the nearly four years that the Trump administration has rewritten the resource management plans that dictate how land can be developed, the rush to mine for coal or tap into oil and gas reserves has failed. is never materialized.

In March, the Utah Geological Survey detailed the average opportunities for fossil fuel development within the original boundaries of the two monuments. There have been no new applications for permits to drill for oil and gas at Bears Ears, according to the report, and 300 oil and gas wells that had been drilled or proposed before the monument boundary controversy have remained. inactive. None have been active since 1992.

Steve Bloch, a lawyer for the Southern Utah Wilderness Alliance, who has fought downsizing in federal court, said the energy claims were so distant that they were unlikely to ever pay off. But conservation groups were concerned, as doors remained open to fossil fuel development on about 2 million acres that had once been protected by monuments.

“Under Trump, and as part of the ‘energy domination’ program, we had every reason to believe that there would be a new coal mine in the Grand Staircase, whether they would tackle the tar sands or the shale. bituminous or that there would be speculation the extraction of uranium or the leasing of oil and gas, â€he said.

ICN provides free, ad-free, localized, award-winning climate coverage. We count on donations from readers like you to continue.

You will be redirected to ICN’s donation partner.

The new proclamations put an end to these risks because the statute of monument prohibits any new development on public lands.

For long-term climate protection, this restriction could prove important, according to Laura Hilberg of EcoAdapt, who produced a report for SUWA a year ago detailing the potential for climate mitigation and adaptation of extended protection of nature in Utah.

“There are a lot of greenhouse gases that would not be released into the atmosphere if all the oil, gas and coal in those areas were kept in the ground,” said Hilberg, a scientist at the climate adaptation.

Ultimately, the border restores seem to underscore a message that tribal advocates brought to the negotiating table when they first pitched their Bears Ears idea to the Obama administration. For the indigenous peoples of the region, every landscape is part of the natural world upon which all life and everyone depends.

Home Secretary Deb Haaland, a Laguna Pueblo citizen whose ancestors lived in the area, appeared to have the idea in mind during Friday’s signing ceremony. Her voice trembling with emotion, she said, “This is a place that must be protected in perpetuity for every American and every child in the world.”

Judy Fahys has reported on the West for decades from Washington, DC and Salt Lake City. After covering environment, politics, and business at the Salt Lake Tribune, she fell in love with audio storytelling as an environmental and public lands reporter for NPR Utah / KUER. Previously, she spent an academic year as a Knight Science Journalism Fellow at the Massachusetts Institute of Technology. Her work has been featured in The New York Times, Washington Post, High Country News, and Outside Magazine and has aired on NPR. She sits on the board of directors of the Society of Environmental Journalists.