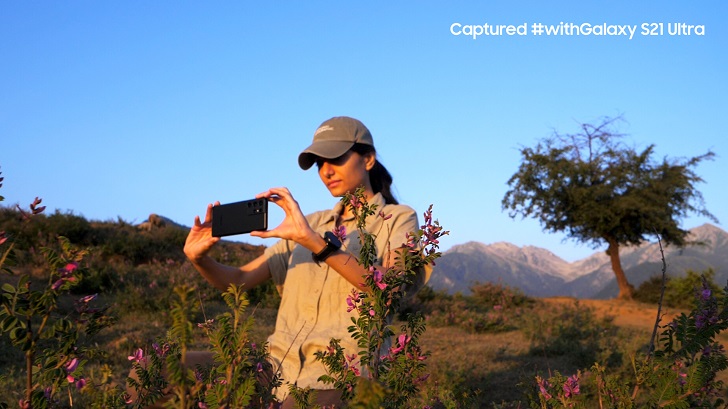 For #UncoverTheEpic, Eshika Fyzee, National Geographic explorer and wildlife filmmaker, embarked on an adventure through the Kashmir Valley #withGalaxy

“At Samsung, we’re constantly looking for new ways to interact with our consumers and deliver innovations that allow them to do more. We’re excited to unveil another exciting chapter of #UncoverTheEpic featuring Himalayan species in their natural habitat. Together with National Geographic Traveler India, we aim to showcase the capabilities of the Galaxy S21 Ultra 5G’s professional grade 108MP lens that can transform the way we film and capture images, ”said Sumit Walia, Senior Director, Samsung India.

As part of this campaign, Eshika Fyzee, National Geographic explorer and wildlife filmmaker, embarked on an adventure through the Kashmir Valley and the beautiful Himalayan mountains. Eshika explored the valley to capture the Himalayan black bear along with other species. Using the incredible camera capabilities of the flagship Galaxy S21 Ultra 5G, it captured the gorgeous species while getting the message across that you don’t always have to have a heavy telephoto lens or bulky camera gear. to document wildlife and natural history.

“I knew I was preparing for a huge challenge when I decided to capture an animal like the elusive Himalayan black bear on a smartphone. They are extremely shy animals and seeing the animal for itself – not to mention photographing one – is a huge task in a vast terrain like the Himalayas. I was blown away by the Space Zoom feature on the Galaxy S21 Ultra 5G, as I could keep a distance and still get crisp photos of the black bear using a smartphone that fits in my pocket, ”said Eshika Fyzee, National Geographic Explorer and filmmaker.

With the most advanced professional-grade camera system, Galaxy S21 Ultra 5G users can capture stunning studio-quality photos in various lighting and settings. The 100x space zoom is powered by Samsung’s very first dual telephoto lens system, both equipped with the dual pixel to capture crisp photos even when you’re away from the action. The combination of anti-shake technology, 10x optical zoom, and laser and dual-pixel autofocus allows cameras to produce results that rival those of high-end digital SLRs. With 8K video, users can capture the entire moment in stunning quality and turn their best moments into high-resolution stills with 8K Video Snap. The Galaxy S21 Ultra 5G’s enhanced professional-grade 108MP camera lets users express themselves and connect in many new ways.