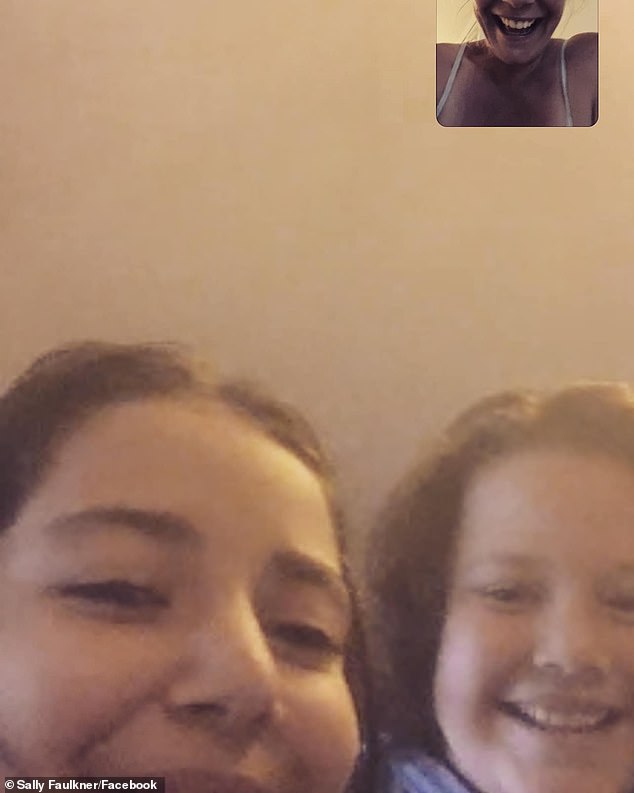 A Brisbane mother who, along with a Channel Nine TV crew, was arrested in Lebanon for the attempted kidnapping of her children has had a moving reunion with her children online.

The two oldest Sally Faulkner were all smiles when they met their mother on FaceTime, in a photo she posted on Facebook.

Lahela, 11, and Noah, 9, live with their father in Beirut after an acrimonious breakup, which saw Ms Faulkner and Nine’s 60 Minutes carry out a botched “child salvage operation”.

Ms Faulkner has since had three more children in Australia, Eli, Izac and Iylah.

Lahela and Noah (pictured) are all smiles during an emotional reunion with their mother Sally Faulkner (inset, top right)

Ms Faulkner, pictured with her children Lahela and Noah in Australia before her ex-husband kept them in Lebanon

Six months ago, Ms Faulkner said she was going to “close the curtain” on her online presence for a while.

“I do this for several reasons,” she said. “When I started this page, I had two followers – it was a blog page where I uploaded thoughts and it was a place to express my grief, when I knew no one else around me. understood my sadness or couldn’t hear my words anymore.

She said she hoped her children “would one day run into them and know that I was thinking of them every moment and that I would never stop loving them.”

“I think there is enough to say for a while about my emotions and feelings around my situation and the paper trail is long.

“It’s time to really start focusing on rebuilding who I really want to be and who I have been,” she said.

She added that she wanted to immerse herself in family time “and absorb every moment that it is possible to absorb – good and bad”.

Ms Faulkner ended this message by saying, “So I’m saying goodbye for now and I’ll see you all on the other side where the grass is really greener.”

Ms Faulkner wanted to reunite with her two children, who are in Lebanon with their father

That greener grass and its comeback online came with the FaceTime call with Lahela and Noah and the resulting happy pic.

Among the hundreds of supporters who responded to Ms Faulkner, one simply said “WOW”. It just brought tears to my eyes.

Another said: “Best thing I’ve seen all year. Those smiles. So happy for you Sally. A little closer. ‘

Many commentators wrote about how beautiful the children’s smiles were.

Another woman said it was “the best post on my Facebook ever.” You do not know me. I just followed your heartbreaking story along the way.

‘I felt for you and I cried for you and your children. Although they are not in your arms, my God, your journey has gone so far.

In April 2016, Ms. Faulkner and the The 60 Minutes team, including famous host Tara Brown, faced up to 20 years in prison and forced labor after being indicted by Lebanese officials for their involvement in the failed kidnapping.

Ms Brown traveled to Beirut with three crew members in 2016 with the aim of reuniting Ms Faulkner with Lahela, then five, and her son, Noah, then three.

Ms Faulkner said her ex-husband Ali Elamine kept the children in Lebanon without his permission.

The plan to grab children from a Beirut street with the help of a child recovery team came to an end when the 60 Minutes team spent two weeks behind bars in Lebanon.

They were released from prison after charges were dropped.

Channel Nine reportedly paid Mr. Elamine US $ 500,000 as part of official settlement after rejecting an earlier offer of $ 350,000.

The botched operation sent shockwaves over to 60-minute crew Alison Langdon – now a breakfast TV host – calling it “the worst day of my journalistic career.”

Lebanon, unlike Australia, is not a party to the Hague Convention, a treaty designed to ensure the prompt return of children who have been abducted internationally by a parent.

Producer Stephen Rice was then sacked by Channel Nine after spending 32 years with the network.

Tara Brown is pictured returning to Australia from Lebanon, flanked by then-60 Minutes producer Stephen Rice, who was later sacked by Channel Nine.

The return of William Orbit: where has it been over the past ten years? | OUTInPerth