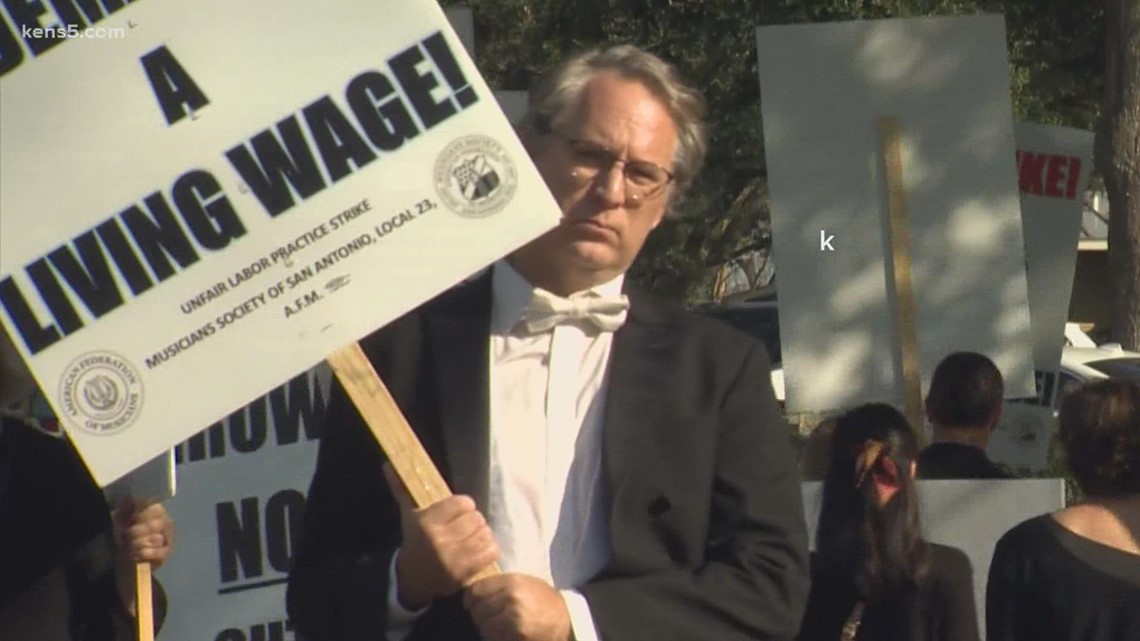 Striking Symphony Musician’s staged a silent protest outside the home of a member of the management.

The San Antonio Symphony closes 2021 without a single performance for the season due to the ongoing dispute between the symphony society and the musicians’ union.

Although they are known for the sounds they create, on Thursday they walked in silence.

“We are silent right now because we were forced to go on strike,” said Mary Ellen Goree, second concertmaster and chair of the musicians’ bargaining committee.

“We were forced to go on strike because our leadership imposed intolerable conditions that they knew we would find intolerable,” she said.

Musicians from the San Antonio Symphony, dressed in their black concert gowns on an 80-degree December day in Texas, picketed outside the home of Symphony Society executive director Corey Cowart.

“Just as we are silenced on stage, we will remain silent outside his house,” Goree said.

They hope to convince him that they are serious.

In a recent statement, the Musician‘s Union said the finances of the Symphony Society are in a better position than they have been since 2014. Thanks to the cancellation of PPP loans, other grants obtained during the pandemic and the Lack of costs associated with setting up performances, the Symphony Society held assets of over $ 2.7 million at the end of November 2021.

The Symphony Society told KENS 5 in a statement:

“The Symphony’s current position in net assets is roughly where we were when we went through difficult times in our history. “

Also adding: “The path to maintaining stability and moving to sustainability is to focus on growing reliable and renewable annual income, while embracing new financial discipline for the long term. “

They also pointed out that of that $ 2.7 million, $ 2.2 million is held in restricted endowments that are not under the control of the board of directors or management of Symphony.

Goree said the musician was focusing on stage again. But only with a full symphony under a fair contract.

“My colleagues and I would love to start making music for our fellow citizens in San Antonio again, but not at the cost of agreeing to terms that will ensure the demise of the San Antonio Symphony.”

Musfur chasm: the chasm in the desert of Qatar