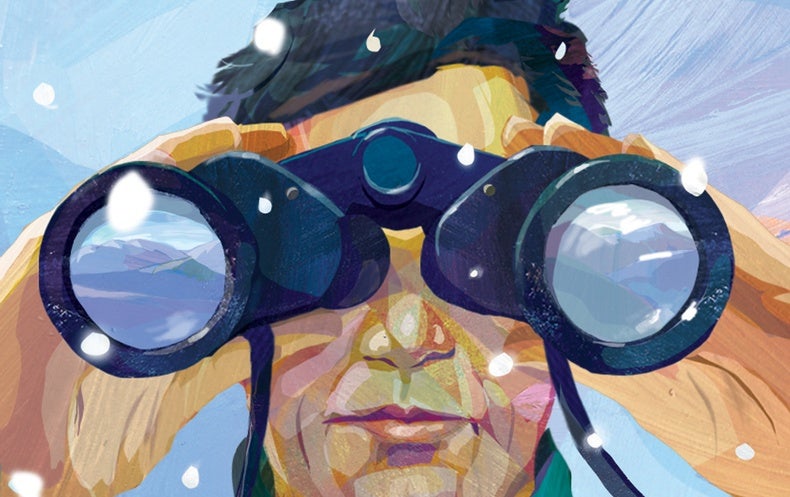 With every new report on the looming and continuing effects of climate change, it’s easy to spell disaster. Over the next few decades, as the world’s glaciers melt and sea levels rise, hundreds of millions of people living in low-lying coastal communities will be forced to settle on higher ground. But the mountains are not a safe place either, as forest fires are on the increase and water is scarce, both due to the disappearance of snowfall. “Frozen water made our world,” writes author Porter Fox. “And as it disappears, everything in our backyards, our cities, our homes, our jobs and our lives will change.”

For the 670 million people living in high mountain regions around the world, shrinking glaciers (and the rivers they feed) will leave these once snowy areas without water, parched to the point of geological dehydration. Over the next three decades, the length of winter in the United States could decrease by 50%. A 2004 study in Climate change predicts a decrease in snowpack thickness of 25 to 100 percent by the end of this century; another study warns the southwest will not have enough snow to support ski operations by 2050. Such dramatic losses will devastate western forests and dry up rivers like the mighty Colorado, which provides water to some 40 million people and has been in drought for more than 20 years. Indeed, the very first reductions in water consumption were applied to its basin states in August.

But what is lost in these reports, and the catastrophic words that often flow from them, are the creative and persistent people behind the study summaries: those who dedicate their lives (and sometimes risk it in the process) to researching the study. some of the most remote and wild places in the world. In The last winter, Fox gives names and stories to much of the data as he travels from Washington State to Alaska to Greenland to Switzerland and beyond, connecting with scientists who often painstakingly gather information. that the rest of us rely on to make sense of our changing planet.

The book is part an adventure travel tale, part a profile collection and part an essay, as longtime skier Fox reflects on what the world will be like without snow. Due to this mash-up, The last winter can seem a bit disjointed at times, and sometimes it’s hard to keep an eye on who’s who as Fox jumps from person to person and place to place. (It doesn’t help that the pandemic has cut off the book’s large-scale reporting.) But when he settles into a new character and destination, Fox does a great job of humanizing scientists. In Washington, he goes on a backcountry ski tour with Kelly Gleason, a Portland State University researcher who helped study a particular feedback loop: when black carbon from When burnt trees fall on the snow, it absorbs more sunlight, causing the snow to melt faster and dry up the forest sooner, creating a forest more prone to fires. The idea had occurred to him while skiing in a burn scar. When Fox asks Gleason what life will be like without winter, she replies, “Yeah, I’m not ready to face this.”

Writing is at its best when Fox describes the landscapes. In the Arctic, for example, “It’s never really dark … The reflective surface of snow and glaciers glows blue under the moon and stars. The night is a beyond of ghostly shapes and distant sounds, as if you are opening your eyes underwater. He ponders what the fading winter will mean for the cultures that depend on it, both ancient Indigenous cultures and modern recreational cultures like skiing. In Greenland, Fox joins a team of Inuit guides who seem better prepared than most to face the harsh realities of climate change.

Yet it is the research into the ongoing losses in the cryosphere that provides the weight of the book, if only because of the dire condition it describes. As Fox notes when discussing the multiplier effects of droughts, wildfires, shrinking snowpack and longer summers: “Like most climate change around the world, the problem is getting worse. Lack of snow cover allows sunlight to maintain new plant life earlier in the spring, increasing the demand on the dwindling water supply and more fuel for fires.

If there are faults in The last winteris that the book suffers from the same flaws as many reports on climate change: it is too focused on the canaries in the coal mine. The rapid rate at which we have already lost glaciers and biodiversity (to name just two examples) has not yet prompted our species to take aggressive action. Fox sincerely writes that “measurement is the key to solving the problem of climate change,” but that’s a wide-eyed point of view. It’s what we collectively do with this data that matters most now, and the book offers few nods to the kind of transformative solutions we need.

Exit reading The last winter, there’s no other way to feel than, well, dreadful. As Fox notes, “the sedative effects of modern comfort [make] it looks like everything [is] it’s going to be fine, as if someone is going to figure it all out. “-Ryan krogh

Aesop’s animals: The science behind the fables
by Jo Wimpenny
Bloomsbury Sigma, 2021 ($ 28)

Come for the fables and stay for the behavioral research in this stuffed but delicious collection of essays. Each chapter of Aesop’s animals begins with a tale by the mononymous Greek storyteller— “The Ant and the Grasshopper” (law), “The Fox and the Crow,” plus seven more, then compares its plot to centuries of investigation. Do lions reward acts of selflessness, like Aesop’s big cat with a thorn in its paw? Are wild wolves capable of deceiving, clad in sheep or otherwise? What exactly is the physics of a crow? For the answers to these questions, author and animal researcher Jo Wimpenny takes us to the field, the zoo and the laboratory.

Many animals in Aesop’s stories align with the biology of their flesh and blood counterparts. Studies confirm that a dog like the one in “The Dog and Its Shadow” would mistake its own reflection for a rival. But other fables describe animals in a way that contradicts science. Aesop’s donkeys, for example, never display the patient and gentle skill frequently seen in the donkey species of the world. And sometimes the answer to the question of whether Aesop got it wrong is trickier. To judge the accuracy of the monkeys that “ape” humans in “The Monkey and the Fisherman,” for example, scientists would first have to agree on what even imitation is – a controversy always. unresolved despite a century of research and discourse.

Along the way, Wimpenny introduces us to living figures, human and otherwise, from the history of animal studies. Take the progressive-era psychologist who tested the intelligence of primates by studying a chimpanzee who had learned to smoke. Or Bertie, the fastest turtle on record, who was still 70 times slower than the average hare. Aesop’s animals is both an intense and playful look at how humans, storytellers and scientists alike, view the mysteries within the creatures we share this planet with. –Elena Passarello

A natural history of the future: What the laws of biology tell us about the fate of the human species
by Rob Dunn
Basic Books, 2021 ($ 30)

As we grapple with the effects of climate change, applied ecology professor Rob Dunn warns against tightening our grip on nature by controlling it with engineering. Instead, he urges cooperation with the biological laws of nature that truly govern life on Earth. Dunn’s lucid discussion offers insight into surviving climate variability: the law of corridors supports the creation of habitat bridges to help species flee to new homes; the law of diversity favors the cultivation of refuge plants alongside transgenic crops. With chaos in our future unknowable but inevitable, Dunn’s absorbing analysis advocates making the most of the few certainties we have. –Dana dunham

Super Volcanoes: What they reveal about Earth and the worlds beyond
by Robin George Andrews
WW Norton, 2021 ($ 27.95)

Robin George Andrews recognizes that volcanoes are often destructive and terrifying. But, he writes, they are also majestic sources of power that could have been incubators for early childhood and can teach us a lot about our own world and those beyond. As a trained volcanologist, Andrews is impressed with his subjects; his zeal is evident in his descriptions of the rocks and lava of each volcano, which can sometimes border on excess. But his attentive reporting will be appreciated both by those curious about the magma and by anyone who simply wants to wonder about some of the weirdest and most powerful forces in the universe. –Tess Joosse

The arts of the microbial world: The science of fermentation in 20th century Japan
by Victoria Lee
University of Chicago Press, 2021 ($ 45)

To understand the invisible gardens that give us sake and penicillin, historian Victoria Lee explores the industrialization of Japanese fermentation, highlighting the “microbial blacksmiths who seek to manage microbial interactions with society”. Lee translates a brewing motto, Onko chishin, such as “finding new wisdom by cherishing the old one,” an appropriate setting for the book. This porthole on twentieth-century Japan is more scholarly than narrative, but there are also flashes of intrigue: a technician’s obsession with precision, the smell of soy sauce supplemented with amino acids, the worldwide transport of two liters of corn liquor. –Maddie bender